Written language turns the continuously changing sounds of spoken language into visually discrete blocks of symbols separated by spaces on paper or on screen. These discrete blocks are words. Words are the smallest units of meaning needed for verbal thought. They are combined into larger units of phrases and sentences when we are thinking about the world and everything in it.

In an alphabetic language like English, words are written with letter symbols. These symbols represent the sounds that the inventors of the written language abstracted from the speech of the people in their community.

The inventors of writing had to analyse the speech of many people in their community to derive the common sounds that made up spoken words. It was found that there are no 'pure' speech sounds, as such, because the sounds vary according to the pitch, tone and other qualities of the speaker's voice.

Hence, these sounds had to be put into 'categories' of similar sounds. These categories of sound are called phonemes. The corresponding symbols (letters) are called graphemes.

------------------------------
Our reading scheme begins with very simple picture books containing an illustration and a few words on each page.
Each illustration is closely related to the words on the page so that the meaning of each word is clear.
This ensures that children have something they can relate to before they go on to learn about the letters in written words and the sounds corresponding to them.
Teachers may then begin by saying the whole word first, ensuring that the children clearly know how to pronounce it and that it is in their spoken vocabulary.

Teachers may then go on to split each word in three different ways to demonstrate how the letters relate to the sounds in the word.

1. The easiest way to split a word, so that it is spoken as naturally as possible, is into ‘body and coda’, e.g. 'ca-t, ma-t, ha-t, ba-t, ra-t, he-n, do-g, bi-g, bo-x'. It is easier for children to split words in this manner, because, as people, we speak in syllables. Our speech is not made up of consonants and vowels. These are abstractions imposed on speech to convert it from a spoken medium into a visual medium.

It is impossible to articulate some consonants alone, e.g. 'b, p, t, d, c, k, g, j'. An audible puff of air is given out when we try to articulate these, thus making them into syllables, so that we say 'buh, puh, tuh, duh, cuh, kuh, guh, juh'. (Syllables, as in the babbling of babies, e.g. 'ba, ma, da', and words like 'a, oh, I, am, is' are the smallest units of human speech. Whenever we speak we expel air and sound. We call the open mouth actions 'vowels', 'a, oh, I'. The actions we do with our lips, and teeth, produce consonants. We cannot articulate most consonants alone, but we can say 'sssssss', sh, mmmmm' and  a few more. Please see our glossary of terms for an explanation.)

The above way of splitting words also draws the child's attention to the final consonant in the word and its corresponding letter.

2. Teachers may also split each word into ‘onset and rime’, e.g. 'c-at, m-at, h-at, b-at, r-at, h-en, d-og, b-ig, b-ox'. By splitting words in this manner, children are able to identify rhyming endings in different words, (VC syllables which are easy to articulate) and the initial letter/sound correspondence of the word is brought to the children's attention.

At the same time teachers should also show children how to write the letters.

While children are practising writing each letter, they are internalising its corresponding sound, either vocally out loud, or silently to themselves. (This is phonics - letter/sound correspondences)

Most importantly, children should also write the whole word by writing the letters in the correct order from left to right across the page with spaces the width of the little finger between each word.

But most of the common words in English are not phonically regular words. When children begin to learn common irregular words, it is important that they learn how to say, write and spell the whole word explicitly.

They will notice that each letter does not always correspond to a specific sound. These words have to be learnt by visually remembering their spelling patterns and the sound of the whole word, e.g. the, to, go, no, me, you.

It is not until children come to learn to read and write that they need to be aware of the sounds within words.

In our reading scheme the letters of the alphabet are first seen in phonically regular CVC words, (consonant-vowel-consonant). The first letters introduced in books 1A and 1B in our AB Starter Pack are 'a, c, t, h, m, o, n'. These letters appear in the words 'cat, hat, mat, man, hot, cot'.

These phonically regular words are joined by other common words which are not of the form CVC. These words are 'the, a, and, in, on'.

It is not possible for young children to split the word 'the' into its letter/sound correspondences because none of the letters are pronounced in the same way as they are in simple regular CVC words. Children have to learn it as the specific letter combination that makes up that specific word.

It is possible to split the word 'and' into its grapheme/phoneme correspondences, but children may find it easier to simply remember 'and' by its specific letter combination too.

Also, the word 'a' is not pronounced in the same way as it is in 'cat, hat, mat'. Children simply have to learn how to pronounce it when they see it as a single letter word in a phrase or sentence.

The phonics in this part of our reading scheme corresponds to the phonic content in Phase 2 of Letters and Sounds.

The books in the First Words Series and Tom and Bella Series 1 go beyond the phonic content of Phase 2 and overlap with Phase 3, introducing words such as 'is, has, dogs, mugs' where 's' is pronounced /z/, and adding words with adjacent consonants as in 'drip, fills, press'. Complete sentences are also used in the later books.

The phonics in the next part of our reading scheme corresponds to the phonic content in Phase 3 of Letters and Sounds.

Common words, not of the form CVC, are also introduced at this stage. These words are 'see, look, me, my, with, oh, no, very, is, has' as well as the names Jelly, Bean, Lotty, Kevin and Wellington.

The English language has multiple correspondences for all its letters and sounds and some words are more easily learnt directly from their spellings (orthography).

As they progress through the next few books children practise reading regular CVC words, and at the same time, they learn more common non-CVC words, such as 'to, go, you, we, are, said, away, for, play, down, out', in books 11A-16A, 11B-16B. Some of these words use the regular phonic correspondences to be taught in Phonic Phase 3. These are 'see, look, for, out' which contain the graphemes 'ee, oo, or, ou'. The words 'play, away, down' contain the regular phonic correspondences 'ay, ow' which are classed as Phonic Phase 5. However, we include them at this stage of our reading scheme because we have not been able to avoid them in writing appropriate text.

Children are now developing their orthographic memory for the specific spellings of words. They are using syntax (the order of words in sentences), meaning and grammar to help them identify words. They are also becoming more fluent in their reading.

Words with more than one consonant at their beginning and/or end are also used. Words of this type are first introduced in book 3A of the AB Starter Pack. They are used consistently throughout our reading scheme because it is impossible to write stories in natural language without them. Children are able to learn which combinations of consonants occur in English words. There are only a limited number of them.

The next type of written word we introduce are those containing consonant 'digraphs'.  A 'digraph' is two letters written together to represent one sound, e.g. 'sh' in 'ship', 'th' in 'this', 'ch' in 'chicken'. These digraphs first appear in Tom and Bella Series 2 (book 5 'sh', book 6 'ch', ) and My First Animals (book 2 'ph' and book 6 'ch')('ph' only occurs in the word 'elephant' and no other word). They lead into the A Digraphs Series (A17-24) and the B Digraphs Series (B17-24) where we reinforce 'sh, ch, th' throughout with many examples.

Words containing consonant 'digraphs' are also included in the next set of high-frequency words, i.e. 'he, she, they, her, come, do, two, who, little, all, goes, does, water'.

Words containing vowel 'digraphs' are reinforced at this stage so that children begin to learn the letter combinations that represent the vowel sounds of the English language. The specific digraphs we reinforce are 'ay, ee, oo, ow, ou, or' which have appeared already in the high-frequency words 'play, see, look, down, out, for'. We also include 'ai, er' as they appear in the words 'rain, water'.

This means that children are able to pronounce other words with the same vowel spellings when they see them in other printed material, e.g. 'stay, laid, bee, book, town, about, over'.

We introduce more of the common irregular words of the written English language at this stage too. These are 'where, there, here, some, want, move, one, watch, what'. The simple vocabulary in the stories helps children to gain fluency when reading also.

The stories in the later series for Phonic Phase 5 of Letters and Sounds introduce the rest of the vowel graphemes to be taught to children in Year 1 in schools in England. Many of these graphemes have multiple letter/sound correspondences, e.g. the vowel sound in the middle of the words 'storm, crawl, caught, wall' has four different spellings, and, e.g. the letters 'ea' in the words 'head, leaf, break' are pronounced in three different ways.

These later stories are also written in the past tense, so that children meet words ending with 'ed', e.g. 'wanted, jumped, dragged', where the 'ed' is pronounced differently in each word. Common verbs like 'saw, was, were, could, would, thought, took, came, heard' are also introduced.

Whilst children are learning to recognise and remember more words using their visual memory for spellings, they are also becoming more fluent readers at each level.

The vocabulary in the books is especially made up of common words that we hope children have already met in their spoken language. There is no intention to include uncommon words to expand children's vocabulary at this time.

The aim of the scheme is to help children turn the words they know from speaking and listening into a written form so that they get over the first hurdle on the road to becoming literate. 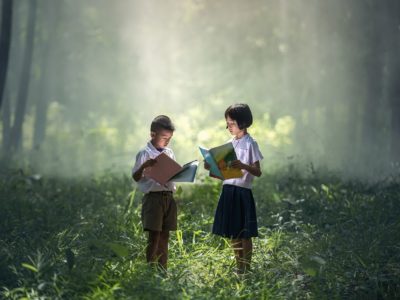